Tilos, the first island to run on sun and wind energy!

Ever heard of the island Tilos? Maybe some of you have because it has been in the news as one of the islands that wants to take in refugees from countries like Syria! But there is a lot more to Tilos; solar panels, a windmill and a plant that converts and bundles all generated energy. Tilos is ready to become the first island in the Mediterranean that mainly runs on sun and wind energy. 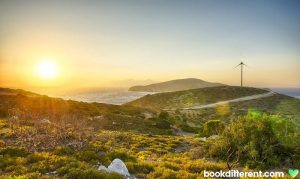 The mayor of Tilos, Maria Kamma, followed in the footsteps of Tassos Aliferis, a convinced environmentalist. He already imposed a hunting ban on the island in 1993; which at that time was quite unique in Greece. Tassos made sure that the island officially became a nature reserve. By promoting ecotourism, he managed to attract hikers and nature conservationists to the island. Tilos now receives about 13,000 tourists a year and together they form the main source of income for the approximately 500 residents.

The new mayor, Maria, introduced the Tilos Project, which, in 2014, was approved by the European Commission. The remote island, located between Kos and Rhodes, has always been a pioneer in nature protection. Rare birds live in the rugged mountains, special plants grow here and underground rivers flow. Now they are part of the Tilos Project. This project is testing the integration of an innovative local-scale, molten-salt battery (NaNiCl2) energy-storage system. If successful, this energy storage technology could be widely replicated on islands to complement and encourage the use of variable renewable energy sources! 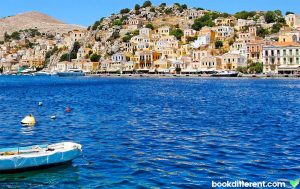 The project is embraced by the population of Tilos. Because it is not only better for the environment, the inhabitants also benefit from it. Until now, the island was dependent on a submarine cable from the island of Kos for energy, and that often led to power cuts!

But the Tilos community does a lot more. In 2016 the city council unanimously decided that they wanted to do more on the matter of refugees. The residents built a small reception center. A non-governmental organization, Solidarity Now, helped with an education and integration program. The official request was made to the government to send families with children. And they came. The attempt to integrate the Syrians into the small community of about 550 people is what makes the project special!  The mayor is making a new business plan to offer the refugees a permanent home and to give them a future on this beautiful and helpful island!

Book your sustainable stay and help out at this incredible island at bookdifferent.com.

Stunning car-free cities around the world!

The medieval streets of Fes-al-Bali, Morocco is the largest car-free urban area in the world, most people get around by foot, donkey, or cart traffic

Tilos, the first island to run on sun and wind energy!

Solar panels, a windmill and a plant that converts and bundles all generated energy. Tilos is ready to become the first island in the Mediterranean that mainly runs on sun and wind energy.
Interesse in alle blog artikelen
developed by