The ITB Berlin takes place in March at the Messe Berlin and always has an official partner country. This year the ITB Berlin took place from March 6 through 10 and was represented by Malaysia, truly Asia. At the end of its Opening day, March 6 the World’s Top 10 Sustainable Destinations were unveiled at the fair. 44 finalists had first been selected from 100 top-sustainable destinations by a Jury representing 12 international organizations. 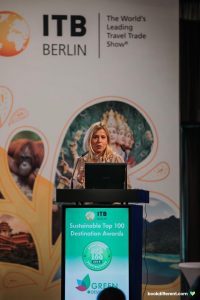 Bookdifferent.com (Lonneke de Kort) was part of the jury panel who announced the following the winner: 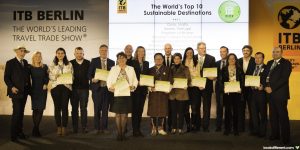 The event was organized by Green Destinations with the support of TravelMole’s Vision on Sustainable Tourism, BookDifferent.com and ten other Top 100 Organizing partners.

Before ITB Berlin, some countries, local governments and protected areas had everything on the line which ensured tourism sustainability, however, they were hardly visible in the larger tourism award schemes. This has changed since ITB Berlin started hosting this annual Sustainable Top 100 Awards event which finally recognizes the key role of these destinations and their efforts.

Lastly, bookdifferent.com was also very proud to team up with front-runner and thought-leader Thompson Okanagan in sustainable tourism to herald the effort of Biospherere RTI communities and businesses to connect efforts, offer and demand to push the sector towards a more sustainable one at ITB Berlin.

Carnival is that time of year when everyone comes together to celebrate the diversity of cultures, exhilarating festivities and activities that are held within various cities across the globe

Sustainable accommodations in South of Portugal

Do you already know South of Portugal? We really fell in love with this beautiful Atlantic country.

In Australia’s Northern Territory, the aboriginal population has a strong connection with land and traditions. It is essential to respect the local rules to have the experience we dreamed of.
Interesse in alle blog artikelen
developed by